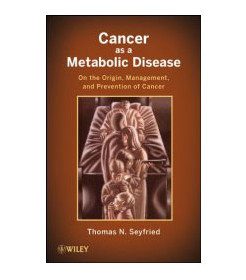 Summer is usually the time to read some of the books that we label as ‘pending’ during the rest of the busy year. In Harmonia, this summer was the turn for a 2012 brilliant book written by Thomas Seyfried, a biochemical geneticist with more than 30 years of experience in the cancer research field. Dr. Seyfried says that his motivation to write this book was the compassion for the victims of a war that we are losing: cancer. Since Nixon’s ‘National Cancer Act of 1971’, the war on cancer is not showing evident clinical and humanitarian results despite the promises that genomic investigators made in the 90’s. Seyfried rescues the ‘old’ theory called Warburg Effect – observed first by Otto H. Warburg in 1923 – and showing that is still valid nowadays. Cancer, according to Dr. Syfried, is not a genetic disease – in the majority of the cases – and should be treated as a metabolic disease.

Dr. Seyfried explains in his book that cancer happens mostly in cellular environments with high glucose concentration and low in oxygen, where energy (ATP) is obtained through fermentation – anaerobic respiration – instead of oxidation of pyruvate in the mitochondria. So basically, the main trigger of cancer could be found in the developed societies’ lifestyle, mainly in the diet and the quality of physical activity. We are summarizing a complex set of chain-reactions, also including decreased immunity, stress, free-radicals, pollution…

The management of cancer, according to this line of thought, should be decreasing the intake of calories and using the ketonic bodies produced by a low-calory diet (ketogenic diet) in first place, as many of the testimonials included in the book did, many times against the opinion of their oncologists (at the beginning).

Life is evolution and we have learn a great deal reading this book. Harmonia diet is going to evolve, following Dr. Seyfried advices.